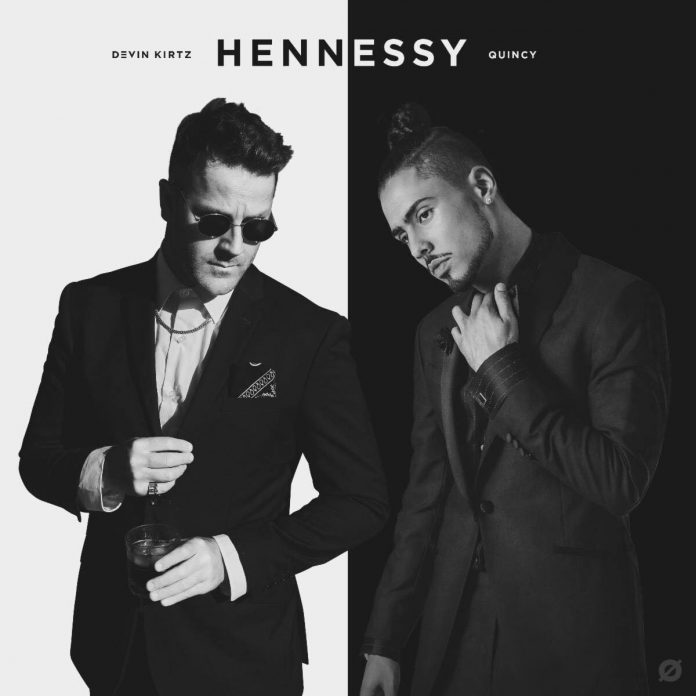 The smooth and atmospheric R&B, soul and pop single, “Hennessy,” is a collaboration between Devin Kirtz featuring Quincy, son of Sean Diddy Combs. The seductive single has a suave and sexy vibe to it. Hennessy means one strength and energy but in the accompanying black and white video featuring both artists, it looks like they are drinking Hennessy, too. They trade places in the video sitting in a what looks a plush leather chair to drink and smoke cigars interchangeably and singing and rapping verses to entice the object of their lust or affection a young attractive brunette woman with long wavy hair that drapes herself rapturously over Devin and Quincy who ooze charisma, confidence and swagger.

Devin Kirtz is an Argentinian-American was born and raised in Long Beach, California. Raised on soul and oldies, Devin grew up listening to artists like Sam Cooke, Stevie Wonder, and Lauryn Hill. Devin gained the attention of International mega-brands, leading to multiple endorsements and traveling the world to host events, perform music, and showcase his freestyle soccer skills to crowds of up to 100,000 people. In addition to his own music, Devin has also written for a number of other artists, including Zayn, Boyz II Men, Swae Lee, Wyclef Jean, Quincy, Cody Simpson, Jordin Sparks, Sam Hunt, and Jason Mraz, to name a few.

Quincy Taylor Brown is an American actor and singer who performs under the name Quincy. In 2016, he announced he had signed a record deal with Bad Boy/ Epic Records. Quincy started in the new FOX original show titled Star. In 2018, he starred alongside Kat Graham as Josh in a Netflix original film The Holiday Calendar.