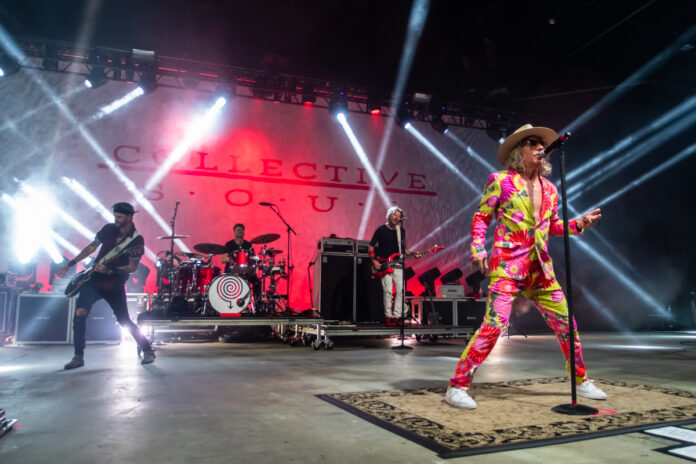 Pompano Beach, Fl – The Amp at Pompano Beach is ready for a night of some solid, good time, rock-n-roll music. As with any other summer night in Florida, especially if there is an outdoor event, the rain was present.  While it may have delayed some fans, it certainly did not deter them. On this night, fans are eager to see Collective Soul and Switchfoot with support from Jada Jackson.

The evening opens with a girl and her guitar. Jade Jackson woos the crowd with her sultry and soulful delivery. Her performance simple, yet engaging. Her short set included songs from her two albums, freshman release, Gilded and her sophomore release, Wilderness. A haunting version of Bruce Springsteen’s, “Dancing in the Dark”, had fans mesmerized.

On an evening when the expectation that the sky’s would open up with some seriously hard when driven rain, fans are eager for the show to go on.  Switchfoot comes to the stage guns-a-blazing.  Jon Foreman and company waste no time in getting the crowd to their feet with “Take my Fire”. Just a couple of songs in, Jon Foreman, in traditional fashion, hurdles the security fence and gets close and personal, not only with the fans in the first rows, but proceeds to make his way to the high end of the amphitheater.  Jon introduces one of Tim Foreman’s favorite song from the 1990’s as the band tears into what can only be considered a badass cover of the Beastie Boys, “Sabotage”. The set continues and the band comes forward to have an unplugged medley of several covers that included “Freebird”, “Hit the Road, Jack”, “Free Fallin'” and others. All this while Jon plays what can only be describes as a double neck ukelele, which he states was gifted to him by Ed Roland of Collective Soul.

Collective Soul turns the intensity up to 11 as they take the stage and open with “Cut the Cord“. Ed Roland certainly makes it a point to stand out with a very colorful and eclectic, flowery suit. He is the centerpiece of the presentation. He commands the stage and delivers a fantastic performance.

Collective Soul is celebrating their 30th anniversary sharing an extended tour, Switchfoot. The two bands, collectively(pun intended), set out on a 40-date summer tour in which the two are headlining. The tour, kicking off on July 15, 2022 in Gary, Indiana, is set to wrap up in San Antonio, Texas on September 24, 2022.

As the band is wrapping up their set, they pay homage to one of the pioneer rock bands to come from Georgia, REM, by covering “The One I Love“and inviting both Jade Jackson and Jon Foreman to join in and sing along.  The set is culminates with “Run” which literally runs Collective Soul off the stage, all the while Ed Roland continuing to play the guitar while the fans sing the chorus out.

As concerts go, this one was a very good one. Great artists, great music and most importantly, a great time.