Cherokee, NC — The crowd at Harrah’s Cherokee Casino Resort packed into the event center and readied themselves to scream on this especially thrilling Friday night, for the godfather of shock rock himself – Alice Cooper – and his eerily delightful band would be delivering a non-stop, theatrical rock n’ roll experience. Those familiar with the legacy of Cooper understand that these productions carry a dynamic musical performance infused with onstage horror dramatics and props such as a guillotine, fake blood, operating table, giant Frankenstein monster, and electric chair.  Tonight, something uniquely special would also be added to the party, the celebration of Alice Cooper’s 74th birthday.

The hunger for rock and anticipation of all things Cooper was quickly on the way to satisfaction, as the custom ol’ black eyes curtain dropped to reveal a nightmare castle set and launched the crowd into a high gear onslaught of an over 20-song set. The audience was on their feet as Cooper, along with his five-member band, emerged from the shadows to “Feed My Frankenstein” and cement that this certainly is a rock ‘n’ roll show.

The showmanship and stagecraft proved unyielding, and in grand fashion, the macabre and villainous stage image that Cooper is known for remained on point throughout the evening. Those who dared to enter found themselves unable to look away, as there was something always happening on stage. Joining in the fantastic mayhem was Chuck Garric (bass, vocals), Ryan Roxie (guitar, vocals), Nita “Hurricane” Strauss (lead & rhythm guitar, backing vocals), Tommy Henriksen (rhythm & lead guitar, backing vocals), and Glen Sobel (drums, percussion). Each brought their own ferocity and all appeared to relish in the moment, enjoying the festivities as much as the crowd.

Closing out the evening was the timeless favorite “School’s Out”, which was followed up by the special event, a full fare “Happy Birthday” song to Alice. Moments before the final bow, Cooper reassured the crowd, “There is no such thing in my vocabulary as retirement.”

As a Rock and Roll Hall of Fame inductee, Alice Cooper’s musical legacy continues more than 50 years after his first music was released, with his 2021 album Detroit Stories. The album is described as a celebration of the sound and spirit of the Golden Era of Detroit rock and includes several classic covers of Detroit hits from the late 60’s.

Only days away from a headlining appearance on the Monsters of Rock Cruise, Cooper has also confirmed additional 2022 tour dates. Secure your spot for an amazing show complete with a highly theatrical live performance, non-stop flurry of hot riffs and of course, a legendary entertainer. 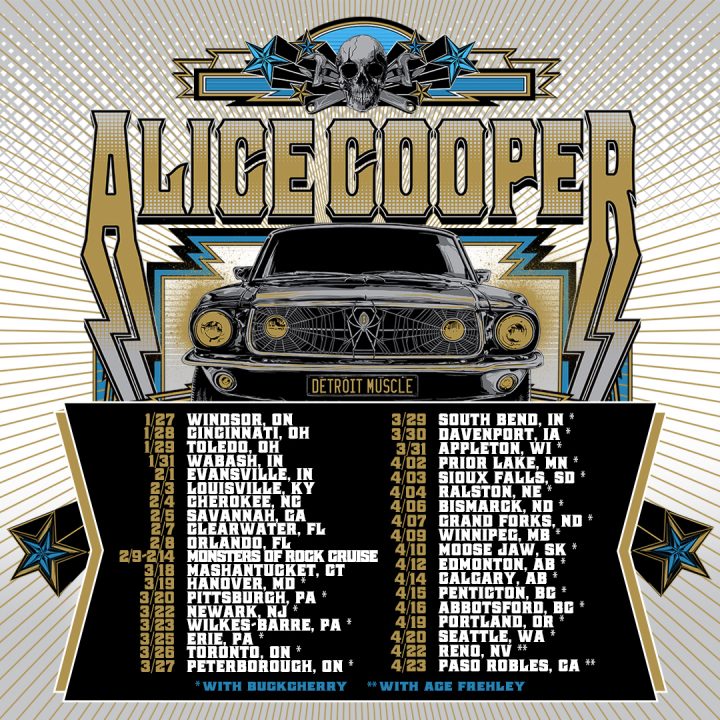