Richmond, VA – Last year I was blessed with attending the 15th anniversary of what has become the early autumn music ritual known as The Richmond Folk Festival. In prior years, folk artists from the four corners of the earth converged on Richmond to share their art with thousands of spectators. In 2020 and as a response to COVID’s impact on live music, Venture Richmond delivered Folk Festival to the world!

This year’s virtual fest included a mix of radio, television, and streaming coverage. Radio and television, of course, were relegated to a local audience and included a large amount of historic Folk Festival audio and video footage, as well as some specifically recorded for this year’s event. 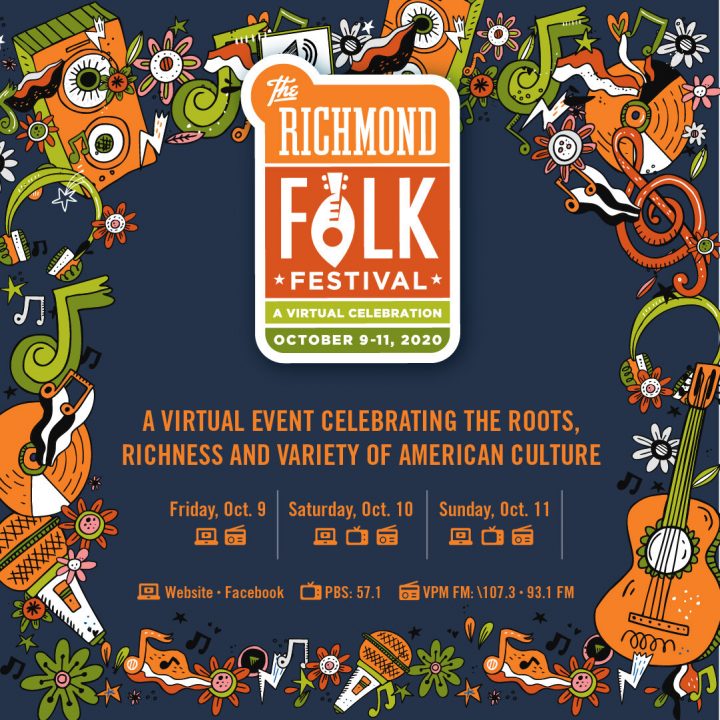 The pre-work associated with putting it all together was immense. The effort included working with artists to obtain new material to be streamed and aired, as well as combing through archive material to get a mix that would appeal to a large audience. Some artists provided their own footage while a few others converged on Richmond to record footage. I had the opportunity to sit in on the recording session with an Afro-Puerto Rican band, Kadencia. It was an interesting experience, as the band members were playing to the production staff instead of a large audience. The production staff (from the local PBS affiliate) were in tune with the music and had a great deal of focus on camera angles, proper sound for mixing, and lighting. What made it different than a typical recording session was that the band talked about their music, named tunes, and interacted with an audience that was, for the most part, not there.

Several other artists were either recorded in Richmond or provided videos to be used on television and in the live stream. Once the videos were done, the work needed to deliver the festival to the world commenced. David Diamond of ProductiveAV was largely responsible for the editing, production, and eventual streaming of the content. I had the opportunity to ask David a few questions about the production and the streaming of the content.

Digital Beat Magazine: Is the stream set up ahead of time (one big series of files) or is a person operating and feeding? Basically, when transitioning between acts and inserting commercials is that being done on the fly or is all set up ahead of time.

David Diamond: So we were originally going to go with Live streams from each band. Trying to get that coordinated and everything synced was going to be more headache than it was worth. The decision was made to have the artists prerecord each section. We then took all the footage from each band, event, demonstration and created one master file for each day. This file included all the lower thirds and tried to make the entire event look cohesive.

DBM: If set up ahead of time, what (tech) do you use to set it up (I do want to cover this to some degree from a tech perspective).

David Diamond: The entire show was produced from Adobe creative cloud suite. Primarily using Premiere for video editing, After effects for countdown and credits, and Indesign for all artwork, Lower thirds, and title cards.

DBM: Which platforms did you use (I know FB, the website, and YT were used)? How do you control the feeds (streams) to different platforms? Did you have a separate feed for each or did you have one feed simultaneously sending out to all?

David Diamond: For streaming, we set up a primary and secondary streaming device. These work in conjunction with one another in case of any failure. We also have a primary and secondary internet line to the building for backup. Lastly, everything was powered from building with a Backup generator and UPS to prevent any power outages. We then stream the signal to a Content delivery network (wowza) who pushes it to every platform and to the RFF website.

The files, along with Closed Captions, were played directly from premiere running on two redundant machines.

DBM: Were all the performances recorded specifically for RFF or were some more general performances?

David Diamond: All performances were recorded for RFF and included a welcome and thanks at the end.

DBM: Any other insights would be great also.

David Diamond: Many hours of preparation went into making this event happen. We had multiple sessions to allow for Venture Richmond and NCTA to review all edits and make sure everything was perfect. We also were able to send the files to a Closed Captioning service to create the captions. Then NCTA took the time to edit them and make sure spellings and all were correct.

As I watched the streaming content the one thing that caught my attention, other than the lack of a live audience of course, was that almost every act did a short hello, introduction, and thank you. In the live show, most of this information may be included in the program but would likely not be delivered live to the audience. I felt that this added a more personal touch to a format where much of said personal touch is removed due to being virtual. This was a very positive addition and really enhanced the viewing experience. There were also several advertisements with some inside information inserted from local establishments, which in and of themselves were beyond the typical television. Again, a deeper dive into the local businesses added a lot more substance to the ads.

While the live aspect of this Richmond tradition was lost in 2020, there were a lot of positives that perhaps can carry over into a fully live year. One such advantage is that, for those of us who may not have been able to attend the festival in a live year, the streaming content is still available to the world. After a time the content will be divided into smaller sections, but regardless, Folk Festival 2020 will live on, as it was produced, to be enjoyed by fans far and wide. We all look forward to a live festivals again, but in the interim, more events produced in the same manner as the Richmond Folk Festival would fill part of the void left by 2020.